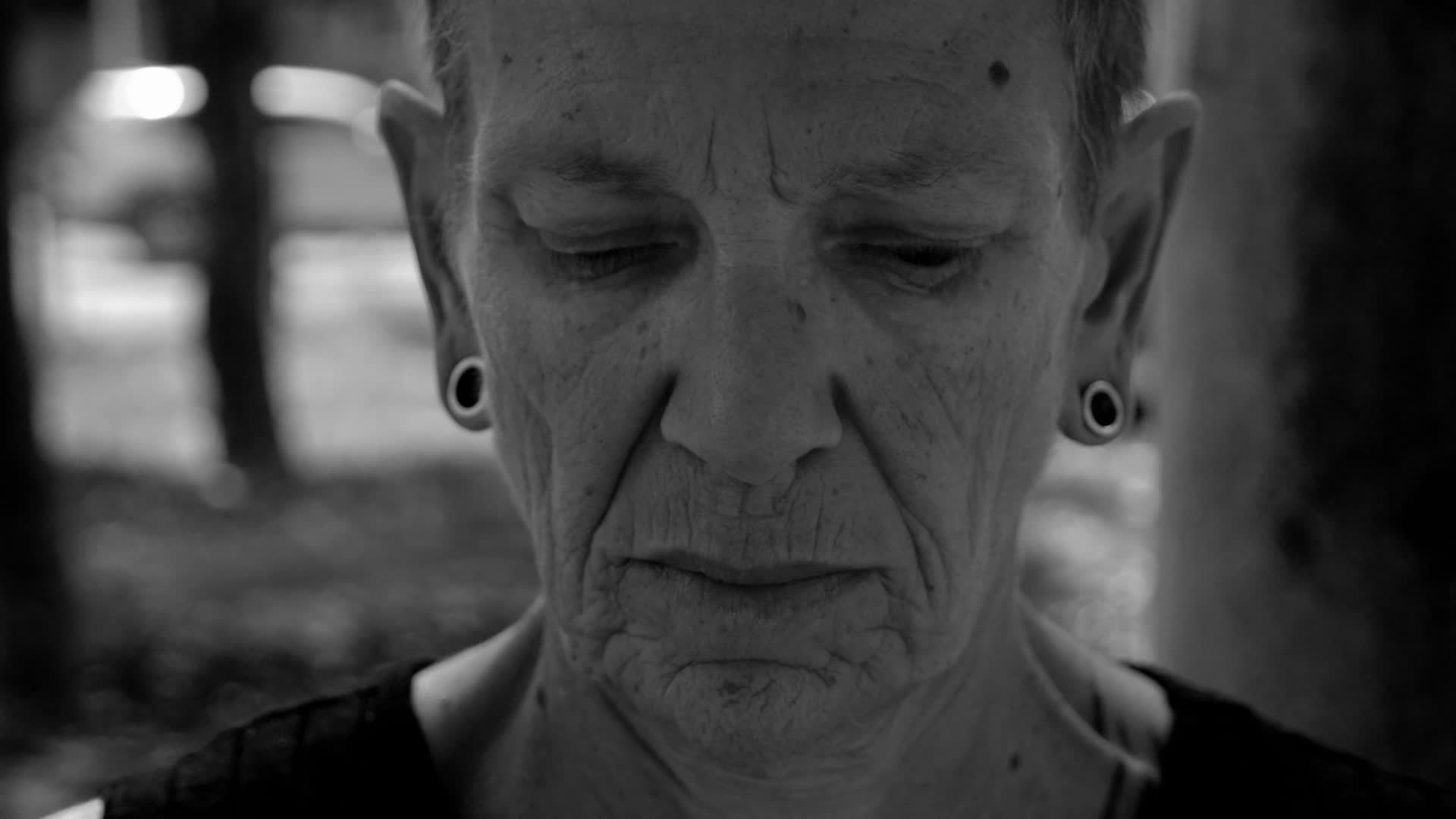 Filmstill, Miney Mick Nine protagonists of different ages and backgrounds form a ‚pack with no leader‘ whose goals and structures do not want to be explained in more detail. Between collectivized lyrics, sound, abstract and dreamlike sequences, rhythmic picture sequences and the individual presence of the performers, an almost mythical subtext develops, which soon becomes a threateningly provocative narrative. In any case, the performers in the video occupy the musical playground as their universe, in which their own laws apply: Here, not only the future is female, but already the present. Director/ Script: Lisa Kortschak, Gregor Mahnert 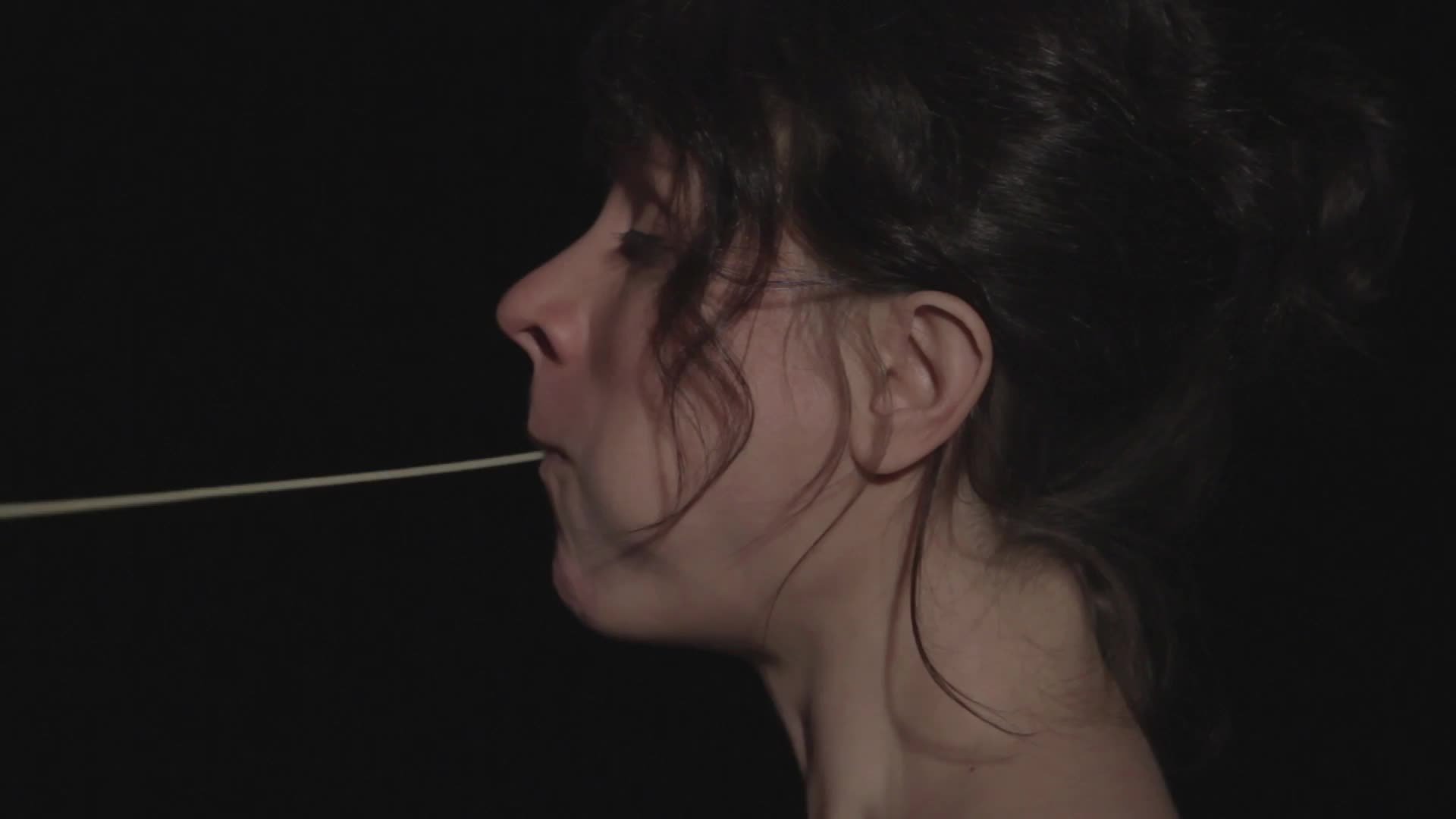 Filmstill, Hot Leash In the video, the kiss scene from Walt Disney’s „Lady and the Tramp“ is quoted in a modified form, twisted in an absurd ways through minimalist images. By overlapping different levels, such as wordless narration, music, seriousness and wit, the aspects in the video merge into an abstract story-telling. Thematically, the film touches on the dialectical interweaving of one’s own and externally controlled desires, of neo-liberal self-discipline and ones personal resistances against it, of failure and success as well as the relativity of these concepts. 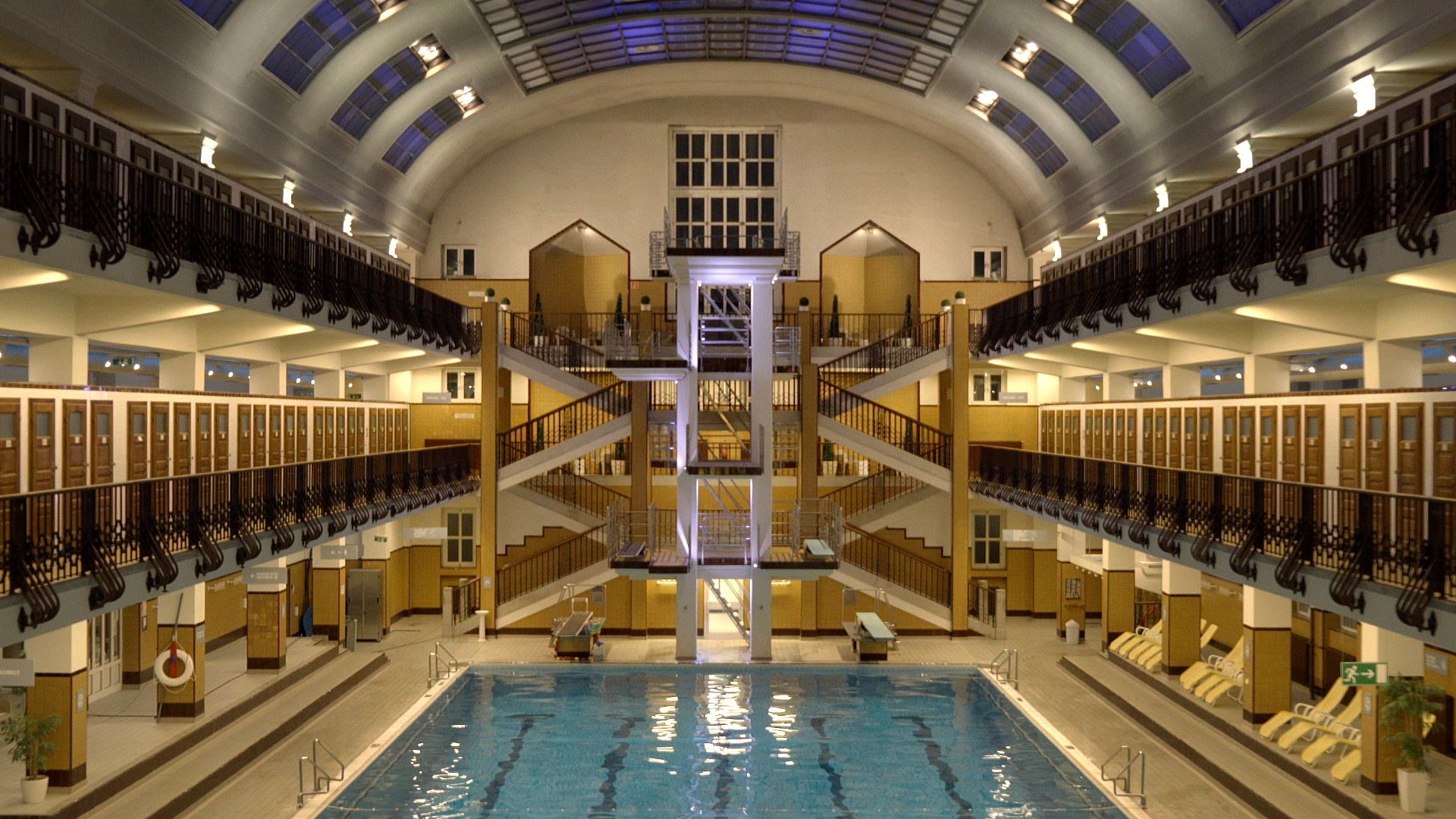 Filmstill, Liquid Sonic Palindrome
An abstract music piece generated by the choreography of an ensemble of swimmers: In Lisa Kortschak’s experimental performance documentary, calm and movement, silence and noise develop to a rhythmic sound composition that dramatically unfolds in the expansive architecture of a swimming pool. The concertation of a palindrome through physical exertion: liquid, sonic, fabulous.
Text: Festivalcatalogue Diagonale 2017
diagonale program 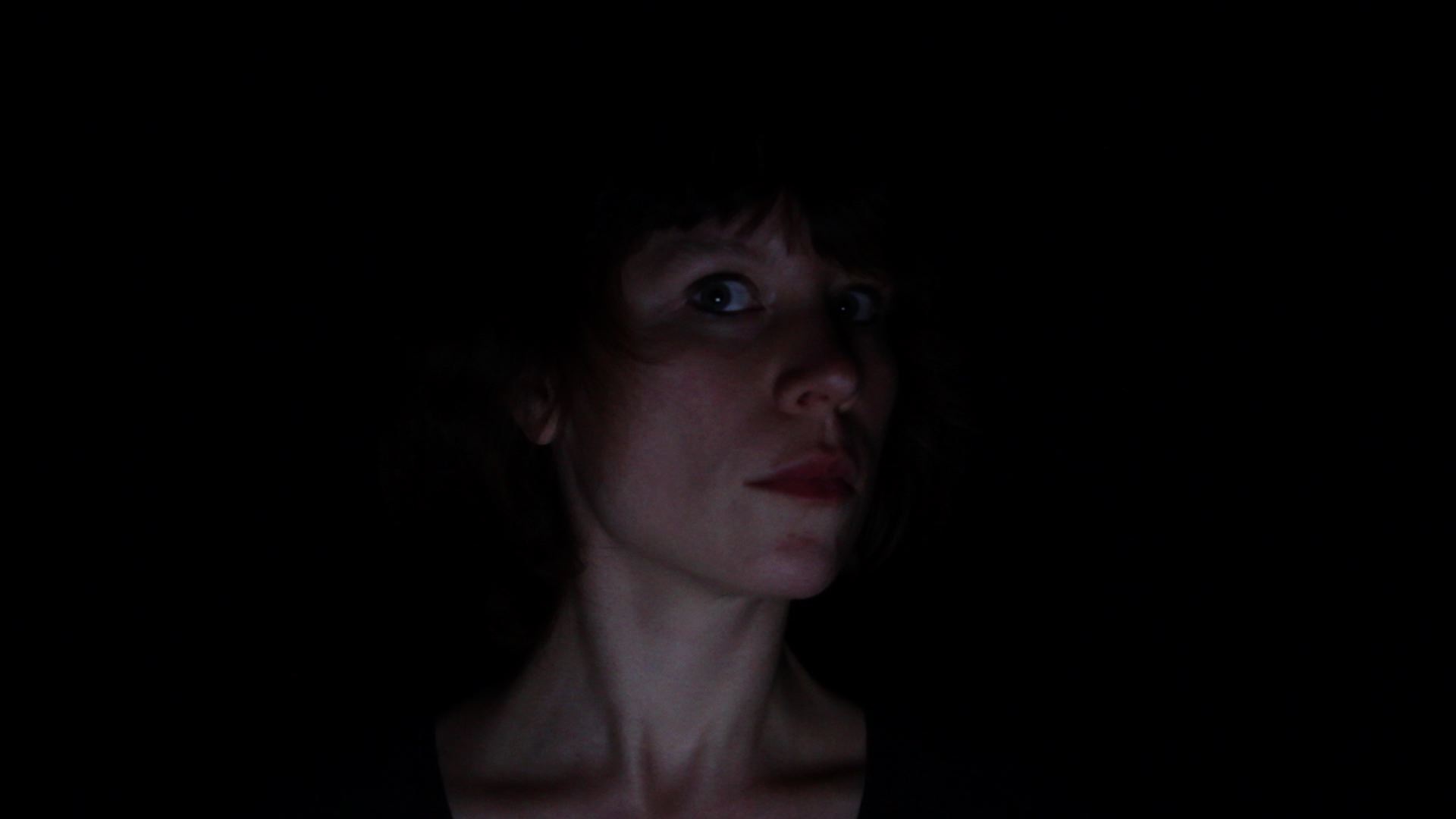 The Michigan Theatre – formerly known as Detroit’s most spectacular theatre for concert and film – today is only used as a parking garage. Built in the course of the car-industry’s impetus, then hit and finally shut down by the industry’s economic turbulence the ‘Michigan’ today gets regular visits by one clientele only- namely by cars. This ironic turn is taken up and played on in the video DETROIT OVERTURE. Eight cars give a concert under the application of humming wipers, flickering winkers, engine noises, horns and banging car-doors. The concert takes place without an audience, the current parameters determining the space influence the artwork. Simultaneously the theatre gets revisited as a cultural spot. Therefore, past and present of the specific location are overlapped within the scope of a performative concert setting. Concept, director, edit: Lisa Kortschak
Entire synopsis/ english
Entire synopsis/ german

The Trailer shows a review on exibitions and events at the Austrian Cultural Forum NY in 2013/14: http://www.acfny.org/home/

INSIGHT THE OUTSIDE, 2014, 30 min/ Full HD
A picture thinking concert / A musical video / A city-opera entering the theater /
A road-movie is coming home
The film shows urban landscapes and people in public spaces captured only from afar while the distance between the observer and the observed establishes it’s own dynamic. The distant view provokes speculation about the ongoing and develops it’s own narrative as the desire of getting closer is initially present. Into this setting four songs are placed. The performer appears on stage and, as the spotlight goes on, the filmscreening turns into a live concert. As parts of the songs are performed in the film, outside-film and inside-performance space will overlap. While live-peformance and film interact on different levels the focus shifts between filmscreening, concert, score and soundtrack. Concept, music, video, performance: Lisa Kortschak

Exerpt, video-part
STREIFEN, 2013, 21.23 min/ Full HD 16:9
Full Title: Streifen – Incomplete memento of Nora Gregor
Nora Gregor’s biography is documented only in fragments. Many moments of her life remain speculative, unclear or lack certain information. This is unusual for an actress who, beeing a movie and theater star, frequented upper cultural and political circles and whose biography seems closely connected to the historical turmoils of her time. Since the missing links in Nora Gregor’s biographical puzzle are irretrievable the image of the person remains incomplete. Therefore, this video portrait does not try to close gaps but makes the missing information tell parts of Nora Gregor’s life story.
Concept, director, edit: Lisa Kortschak
Katalog Festival der Regionen
Catalogue / English translation

Excerpt of 5:18 min The video documents the artistic interventions pursued by the artist in the Golden Hall of the Wiener Musikverein, a strongly codified place which is famous for its acoustics („golden sound“). The 300 concertgoers and the pianist Paul Gulda, playing a digital Bösendorfer grand piano, listen to the concert directly at the ear via in-ear headphones. Yet the actual (concert) attraction—the instrument—is not audible in the video. Featured instead is the golden sound of ambient noise (coughing, the keystrokes of the pianist, etc.) that in other concert situations would be drowned out by the music. Therefore the video, as an autonomous piece, establishes a realm that allows everyone present in the concert hall to perform in symbiotic synchronicity, with the functional particles of communication between music and listener thus explored.
Text: Christian Egger          Concept, director, edit: Lisa Kortschak
http://www.km-k.at/en/publication/lisa-kortschak-oszillentrenous/
http://www.elia-artschools.org/festival/work/oszillentrenous